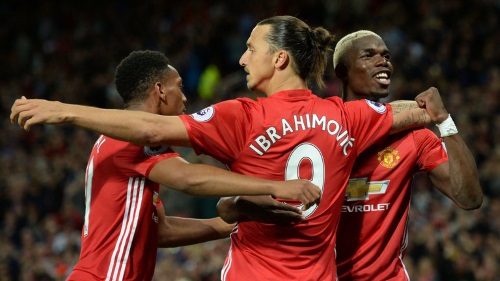 Manchester United come to town to face Arsenal at Emirates stadium in a clash between two top six teams. United have struggled so far this season to find consistency as they infuse their new star players into the lineup. Mourino was the biggest addition this season to coach the Red Devils, and so far he has produced mixed results.

After a blazing fast start to the season, United has faltered and sputtered to their sixth place current standing in the league table. Zlatan Ibrohimovich and Paul Pogba were the two marque signings for Mourino in his new campaign as manager. Pogba has taken some time to settle into his role in the mid field, while Zlatan has been able to lead from the front for his team.

Meanwhile at Arsenal, they sit currently in fourth place. Playing their attacking style football so far this season, have also had mixed results. They are coming off of a tie with undefeated Tottenham, and look to take advantage of this weak United defense and midfield.

Arsene Wenger has been the model of consistency over the years for Arsenal as he has produced Champions League football for them year after year. This season looks to be a close battle for the top four spots with all the power teams back in the mix this season.

This game looks to come down to who can win the battle in the midfield. It’s going to be Pogba vs. Ozil in this matchup as they are the keys to the game for their respective teams. If Pogba can make his presence known in the midfield and over power the Arsenal Midfield, then United should be able to grab a point or even possibly the full three. However, if Mesut Ozil, Theo Walcott and Alexis Sanchez start to run wild for Arsenal, then United can find themselves in deep trouble.

This match will most likely be decided by an early goal by either side. Should be a thriller to watch.