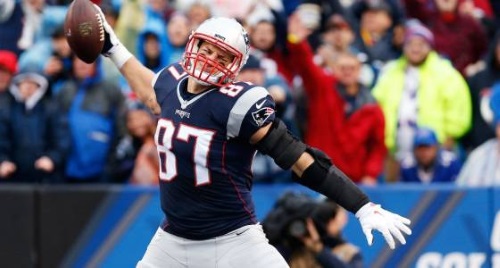 At times, Rob Gronkowski appears to be nothing but a fun-loving guy. He’s the consummate joker, and his immaturity makes him an easy player to root for. Gronkowski new good and well that a touchdown in Buffalo would bring his total to 69 for his already accomplished career, and, despite using the suggestive number as a humorous talking point, Gronk is anything but humorous when he straps up and takes the field. In fact, I think he’s the greatest tight end in NFL history and will set records that won’t ever be broken.

Gronkowski caught his 69th career touchdown pass on Sunday from Tom Brady, passing Stanley Morgan’s team record for most touchdowns in Patriots history. Morgan scored his 68 touchdowns in 180 career games, but it has remarkably only taken Gronkowski 85-regualr season games to eclipse that mark. Yes he’s a big body, and yes he has arguably the greatest quarterback of all time throwing to him, but dominance of the magnitude that he puts on display week in and week out is unheard of.

With his 69th touchdown reception, Gronk also joined elite company, becoming the 14th tight end in history with 6,000 receiving yards and only the third with at least 23 games with at least 100 receiving yards. He and Brady are also second on the all-time quarterback and tight end touchdown tandems with 67, only trailing Philip Rivers and Antonio Gates of the San Diego Chargers who have 79 touchdowns.

Now, Gronkowski still has some work to do, but with his young age, a top-tier quarterback, and an all-time great coach at his disposal, there’s a good chance that he’ll be right up there with the likes of a Tony Gonzalez, Jason Witten, Antonio Gates, and Shanon Sharpe once his career is over. Those four guys are all in the top 30 in receiving yards of all time, and Gronk is a little under halfway to Tony Gonzalez, who is ranked second all-time in receiving yards, in just six years. Gonzalez played for 16.