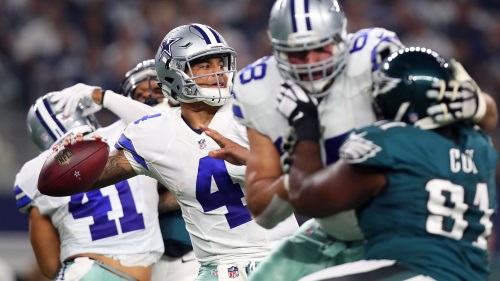 The 12-2 Dallas Cowboys will host the 9-5 Detroit Lions in a game that will have playoff implications in the Motor City.

The Lions hold a one-game lead over Green Bay in the NFC North, and depending on the results of the Packers-Vikings game could clinch their first division title in 23 years with a win over the Cowboys.

The Cowboys clinched their playoff destiny without even hitting the field.  After the New York Giants 24-19 loss Thursday night in Philadelphia, the NFC East title, the NFC’s number one playoff seed, and home-field advantage all come to Dallas.

Detroit’s five-game winning streak came crashing down in the Meadowlands last Sunday.  The Giant’s vastly-improving defense frustrated Matthew Stafford and the Lions’ offense in a dominant 17-6 victory.  The loss allowed the Packers to gain on Detroit in the playoff chase.

“I’m not concerned about any of that,” Caldwell said.  “I’m looking right straightforward at the team we have to face, that’s our focus.  We have to get ready to face a red-hot team.”

The Cowboys inched one step closer to their January aspirations with a 26-20 win over Tampa Bay.  Dallas quarterback Dak Prescott went 32-36 for 279 yards while Ezekiel Elliott ran for 159 yards and a touchdown, as the pair of newly-named Pro Bowl rookies led the charge once again.

Dallas head coach Jason Garrett knows how special it is to have two rookies make the Pro Bowl in the same season.

“It’s very impressive the transition both of those guys have made.  It’s a hard transition from college football to pro football,” Garrett said. “It starts with who those guys are, how much they love football.  I think what’s been most impressive to all of us is the improvement they’ve made week to week over the course of the season.”

Prescott deflected any Pro Bowl praise and deferred the credit to his teammates.

“It’s humbling.  I definitely wouldn’t be able to do it without this team,” Prescott said.  “Obviously those three guys up front that made Pro Bowl, and I’ve got great playmakers around me that allow me to have fun out there.”

Prediction Time:  Dallas will need all the Pro Bowlers on its roster to overcome a hungry Lions team with a lot more to play for.  Stafford will hook up with Golden Tate for a couple of scores, and the Dallas defense will have a tough time getting off the field.  Elliott rushes for over 100 yards and scores again, but the Lions stay ahead of the Packers and set up a winner-take-all game in Motown next weekend.  Lions pull off the upset, 24-21.