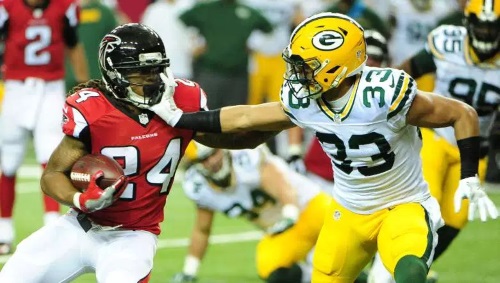 This is Conference Championship weekend. There are two games on the slate for this week of the playoffs and both games should be closely matched and a sure winner is hard to find. The game of the week has to be the matchup between the Packers and the Falcons on Sunday Night, both teams come in hot which should provide for an entertaining game. Here are my picks for the Conference Championship week.

Game of the Week

Two incredible offenses collide this week in Atlanta as the red-hot Packers come to town to face off against the powerful Falcons. Both teams boast incredible quarterbacks, and reliable passing attacks. While Atlanta will be the betting favorites, it is hard to overlook the Packers in this game as any type of underdog. Aaron Rodgers made an example of the Cowboys last week in route to a last second victory over the top-seeded Cowboys. Rodgers played at the highest level achievable by a quarterback in a playoff situation, he continually drove down the field and delivered for his team. They didn’t even try to fake like they were going to run the ball, Rodgers came out and just passed again, and again, and again, and again, until the Cowboys had no defense left. This week, he will find it a little more difficult as the Falcons have a better secondary than the Cowboys do, but its hard to imagine Rodgers being stopped. This game will come down to which offense will be able to have the ball last to win the game. The Falcons better not expect a win with a lead or tie and any time on the clock at all. Rodgers dashed the Cowboys dreams with a 35 second drive to win the game. Matt Ryan has been equally stellar in his playoff appearance and season so far. He has torched defense after defense on his way to become what looks like the leagues MVP. This game would solidify his position as the best player if he were to come out on top. I believe that the Falcons will earn a Super Bowl trip because they have a high powered offense, led by Julio Jones and Ryan and they should make easy work of that weak Packers secondary. The Falcons do not exactly boast a prolific defense, but they are solid all around. They have a MUCH better pass rush than the Cowboys and should be able to disturb and bother Rodgers. The Falcons will win this game because Ryan is at the top of his game, (I believe playing equally as well as Rodgers) and ultimately his play will be the doom of the Packers defense. This game will not be as close as people might think. Falcons win 42-28.

This is quite possibly one of the most intriguing matchups of the last few years. The Patriots, pretty much the number one seed since week 1, take on the Steelers, who boast one of the most talented offenses since the 2007 Patriots. This game will come down to one thing, the Steelers defense. Can this defense stop Brady enough to win this game for the Steelers? Both teams will score, no doubt, but will the Steelers D be able to keep up with this quick attack offense led by Brady? This is up for debate, the Steelers run a 3-4 defense which utilizes linebackers in coverage and blitz schemes, this is great against most balanced offenses because you have enough men to cover receivers and running backs out of the backfield. The problem with this defense versus the Patriots is that with the passing attack of the Patriots using multiple receivers, tight ends, and running backs is that the Steelers have to use linebackers to cover those players. This is where the Steelers might run into some issues because of the speed of Edelman and Lewis. But with a young and speedy set of linebackers, the Steelers are one of the few teams that could keep up if they can get enough pressure on Brady. I believe that the Steeler’s Defense is up to the task and will be able to get to Tom Brady in this game. Gronkowski will be missed and the Patriots will ultimately fall short. Steelers win 27-24.