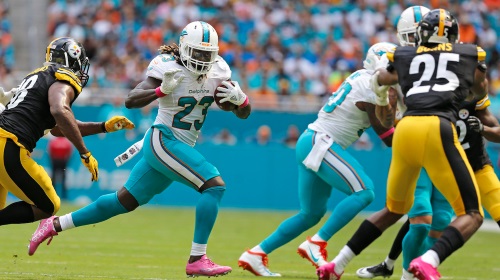 Every week we take a look at the players to add in fantasy football that will make an impact on your lineup. Fantasy football is always full of surprises, with injuries, suspensions, and horrible play; you have to look to the waiver wire to boost your team.  I have compiled a list of key players to give consideration to in the upcoming week per position.

This season has seen the Quarterback position have some up and down numbers, if you do not fully trust your signal-caller for the upcoming week here are some guys to give a look on the waiver wire and possibly start on your team.

Brian Hoyer, Bears (4.0% owned) – The Bears are not very good, I get it. But Hoyer has been great for this Bears team, posting great numbers the past couple of weeks. I would pick up Hoyer as he has weapons to throw to and he doesn’t look to be losing his job anytime soon.  He is like a Rex Grossman from years ago.

Colin Kaepernick, 49ers (3.2% owned) – The Kap is back. He was unimpressive in his first start this season for the 49ers, yet was able to put up 18 points in fantasy. His capability to run and pass are huge bonuses for fantasy owners. If you are looking for some solid numbers weekly in the 15-18 range, look no further.

Running backs have great value in fantasy and if you can find a guy that is going to get consistent carries then you should do well at this position. Here are my picks for waiver wire pick-ups this week.

Jay Ajayi, Dolphins (75.4% owned) – Ajayi had a monster week last week with over 200 yards on the ground and two touchdowns against a solid Steelers team. If the Dolphins are able to turn this thing around, Ajayi is a good option going forward if he is still available.

James White, Patriots  (12.8% owned) – With Brady back, we have seen  White becoming a viable option out of the backfield, he is dangerous through the air and on the ground and can steal points away from Blount. White caught two touchdowns last week and could produce more as the season goes on. In deep leagues he might be someone worth giving a shot.

We have seen some smaller name players taking the lead at this position this season which provides a lot of hope for people needed a solid performer to add to their team.

Golden Tate, Lions (73% owned) – Tate finally put together a solid performance in 2016 this past week scoring 22 fantasy points for his owners. If he is available look to grab him because he has a high ceiling. Stafford will throw the ball, and he has great rapport with Tate. Look for him to continue his success again this week.

*ADD OF THE WEEK*

Kenny Britt, Rams (21.1% owned) – After my Sammy Coates fail last week, I expect you to be wary of another WR choice here, but Britt has been solid for the Rams this season and is quickly becoming Keenum’s favorite target in the pass game. Pick him up if he is available.

A position that can win or lose a matchup for you, and one of the most inconsistent positions in fantasy football if your last name is not Gronkowski. Here are my picks for the waiver wire this week.

Hunter Henry, Chargers (24% owned) – Henry had a huge game for the Chargers on Thursday night football in route to their win over the Broncos. He was a favorite target of Rivers who we all know is a fan of throwing to tight ends during his career. Look for Henry to continue to get solid numbers going forward.

Vernon Davis, Redskins (1.3% owned) – One of the most athletic TE’s in the league, Davis is grabbing solid numbers as of late in the absence of Reed in Washington. If you are looking for help here at tight end, sweep him up.

Unless you have one of the top defenses in the league, this position offers a very inconsistent amount of points week by week, but if you are really looking for a change here I have a couple of options for you. I kept my defenses the same this week as they are both solid adds for the upcoming weeks.

Dallas Cowboys (5% owned) – the Cowboys have been semi-impressive to start this season, but they will continue to get better as players come back from suspensions and they continue to grow in confidence. Keep tabs on this defense to possibly be a must start in the weeks to come.

Atlanta Falcons (5% owned) – Taking down the Broncos looked great for this defense this past week. The Falcon are surging and worth a look at defense.

Kickers can also make or break your team, finding a kicker on a good team is key to scoring a solid 10 points a game.

Matt Bryant, Falcons (22% owned) – Bryant is the kicker for the best offense in the league, if he is not owned you better pick him up. He will score points every game because of the position his offense will put in him consistently.

Caleb Sturgis, Eagles (5% owned) – Sturgis is a part of a good Eagles team that has put some points up in recent weeks. Look for Sturgis to help his team score points and get you some help as well if you add him.

Let me know of any players you have added that have been successful for you this season or past seasons. Who has been your fantasy player of the year so far? I would love to hear your feedback!