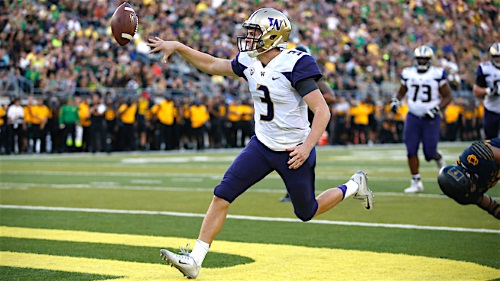 As we approach week 7, we are officially halfway through the regular season slate of the 2016 college football season. This season has been filled with upsets and surprises through six weeks, and the latter half should be just as exciting.

Let’s take a look back at some of college football’s biggest storylines through the first half of this regular season.

Even with Houston’s loss to Navy, there are still strong teams from the “Group of 5” conferences. Tom Herman’s Cougars undoubtedly had the best shot into the College Football Playoff before the Navy loss, but Western Michigan and Boise State are still lurking.

At 5-0, Boise State is continuing the dominance that Chris Petersen started there. The Broncos’ toughest game remaining is BYU at home, and there’s a good chance this team stays undefeated the rest of the way.

Western Michigan has quietly made its way onto the scene, but the secret is now out. The Broncos jumped into the national rankings for the first time in school history, and they also have a shot to end the season undefeated. It’s unlikely that either of these schools makes it to the Playoff, but the highest-ranked team from a group of five conference will get into one of the six major bowl games. ESPN currently projects Boise State to reach the Cotton Bowl, but Western Michigan is another team to keep an eye on.

There were some good offseason hires for the ACC, and we are seeing proof of that right away. Justin Fuente has re-energized Virginia Tech, and at 4-1 the Hokies have a shot at winning the ACC Coastal. The offense has improved, and the defense is playing lights out under defensive coordinator Bud Foster.

Even with the loss to Florida State, Miami is still 4-1 and ahead of schedule under new coach Mark Richt. It will be interesting to see how the Hurricanes close out 2016, because they have a chance to build some momentum on the recruiting front as well.

Also, who in the world thought Wake Forest would be 5-1 right now? The Demon Deacons are on the verge of making their first bowl appearance since 2011, and a lot of that has to do with the defense. Wake Forest ranks 18th in the nation in scoring defense (18.0 ppg allowed), and a big showdown with Florida State on Saturday will tell us more.

We already know the LSU job is open (more on that later), but what other top jobs could be available by the end of the year? Even with the public support for Charlie Strong, one has to wonder about his future if the Longhorns don’t turn things around.

Also, where have the Oregon Ducks ran off to? It has to be disappointing for Chip Kelly to see this team where it is, because they haven’t done much since Marcus Mariota left. After a 9-4 record last year, the Ducks are off to a slow start at 2-4 this season, including a 0-3 mark in conference play.

We are going to assume that Jimbo Fisher is safe at Florida State, and Gus Malzahn’s job security has increased with three straight wins, but USC is another job to look at. It’s only Clay Helton’s first season as head coach, but there is already chatter about him being fired. With Notre Dame in jeopardy of making a bowl game, Brian Kelly’s job is another that could be open.

Tennessee was the favorite in the SEC East coming into the season, but none of us though the Vols would get to 5-1 the way they have. Tennessee has rallied from a double-digit deficit in four of its five wins, after trailing by double digits only once in 2015.

The comeback against Florida after being down 21 points was amazing, but the last-second touchdown against Georgia topped that. According to ESPN, the Vols have had an average halftime win probability of just 40 percent this season. Does this point to a magical season in Knoxville? We will see.

6. Trouble in South Bend and Tallahassee

Both of these teams were ranked in the preseason AP Top 25, but neither are off to a good start this year. It has been a defensive meltdown for Florida State, and the Seminoles will need a lot of help to get back to the ACC Championship. By help I mean Clemson and Louisville losing games they are heavily favored in, so it’s likely Fisher and company will be watching this one from home.

The downfall of Notre Dame has been just as surprising. We thought the opening loss to Texas meant the Longhorns were back, but in reality it was just foreshadowing of Notre Dame’s troubles. The Irish have already fired defensive coordinator Brian VanGorder, and now Kelly is fighting for his job. The Irish are 2-4, and with a tough schedule ahead, there’s a chance this team doesn’t even make it to a bowl game.

5. Dominance in Big Ten Building up to Exciting Final Weekend

Coming into the year we knew that Ohio State and Michigan would be the top dogs in the Big Ten. But after six weeks, it still isn’t clear which team is the favorite. The Buckeyes and Wolverines have both mowed through their competition, and it’s setting things up for a great final weekend.

The Michigan offense (50.0 PPG) has been a surprise, but who thought Ohio State’s defense (10.8 points allowed per game) would be this good after losing so many starters to the NFL? Nebraska is quietly having a great year too, but right now it’s all about this rivalry matchup.

I never thought I would see a true freshman starting at quarterback under Nick Saban. Everyone assumed he would hand the job to a veteran “game-manager”, but Jalen Hurts is the complete opposite of that. That isn’t to say that he can’t protect the ball, because he has thrown only two interceptions, but the Tide offense is more explosive with him at quarterback.

They are first in the country in plays of 40 or more yards (17), and they are tied for first in plays of 50 yards or more (9). You have to respect Saban’s decision to put trust in this young player, and the results are paying off.

The Aggies also have a new signal-caller, and Trevor Knight has led them to a 6-0 start. With his dual-threat abilities and the supporting cast he has, the Aggies offense is averaging just over 40 points per game. Will it be enough to take down Alabama on Oct. 22?

While everyone was penciling Stanford or UCLA in, Washington was staying quiet and waiting on its chance. That chance came a couple of weeks ago when the Huskies beat Stanford 44-6 in a game that wasn’t ever close. After a 70-21 rout at Oregon last week, this team is stirring up a lot of buzz.

Quarterback Jake Browning is playing great, and the defense is causing trouble for opposing teams. It will be fun to watch this team down the stretch as they try to make their way into the College Football Playoff.

Les Miles had little room for error entering this season, and we found out just how small that margin of error was after the Auburn loss. It was surprising that Miles was fired during the season, but something had to be done. With the nation’s top player in Leonard Fournette, and a solid supporting cast of top recruits, this offense failed to impress anyone over the first few weeks.

And at number one, who else could it be? Lamar “Action” Jackson is off to a historic start, and he is everyone’s Heisman favorite through six weeks. Just how good has he been? The sophomore has combined for 28 total touchdowns, and he is well on his way to eclipsing the 1000-yard rushing mark for the season.

The Cardinals need a little help after the Clemson loss, but they aren’t out of the playoff picture just yet. Whether they get in or not, the Heisman Trophy is Jackson’s to lose at this point.

Contributor for All Sports Talk, Bleacher Report, and Saturday Edge. Senior at the University of South Carolina-Upstate, where I hope to graduate with a degree in Education and a minor in Journalism in 2017. If it's Saturday, I'm 100 percent likely to be sitting in front of a television watching college football. Follow me on Twitter @ZachGilliland93