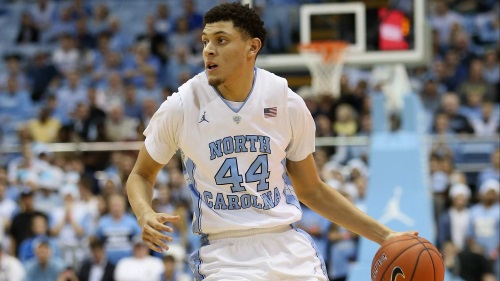 Not a very long time.

That’s all it took for North Carolina’s hoops dreams to come crashing down.

If you placed a wager on UNC, your dreams were dashed – but if you’d like to give it another shot, click here for more ncaa basketball lines to see who the favorite is to win the championship this year.

When Villanova’s Kris Jenkins’ 25 foot rainbow beat the buzzer in the National Championship, all UNC players, coaches, and fans alike could do was stare in shock as the confetti rained down.

“It’s always motivating when you get so close to something you really, really want,” said UNC head coach Roy Williams.  “Then all of a sudden it’s over with and you didn’t get it.  I think it makes you work harder, concentrate more, and it’s been a good motivating thing for our team that doesn’t last forever.”

“I watched the tape of the game all the way up to the last shot,” said UNC junior point guard Joel Berry II.  “I still can’t watch that shot because it hurts me so bad.”

The last shot of the 2016 season also cost UNC two seniors the team relied on heavily.  Brice Johnson and Marcus Paige both were drafted in last June’s NBA Draft, and leave big holes on the court and in the locker room.  Paige and Johnson led the Tar Heels to ACC regular season and tournament titles and an impressive victory over Duke at Cameron Indoor Stadium.

Several starters return looking to fill the void left by the departing seniors.

Junior swingman Justin Jackson decided to return to school after dipping his toes in the NBA Draft waters.  Jackson averaged 12.2 point per contest, and will have more opportunities this year to improve upon that number.

“For me, I know I have got to be a lot more aggressive.  We don’t have a 17 point, ten rebound guy on the block anymore,” Jackson said at media day.  “I’ve always done better when there is more pressure on myself, and I’m looking forward to stepping into more of a leadership role.”

Forwards Kennedy Meeks and Isaiah Hicks will also play more prominent roles this season in wake of Johnson’s departure.  Meeks will be looking to bring his averages up from the 9.2 points and 5.9 rebounds he had last season.

“I think guys like me, Justin, Isaiah, and Joel can definitely step up to the plate, it’s something that we’re looking forward to,” the Charlotte senior said.

“Honestly none of us are feeling much pressure this year, we’ve been here done that,” Hicks said.  “We’ve been to the last game, unfortunately we didn’t win and that is just more motivation for us.”

Berry brings back stability to the backcourt, and is looking to improve upon his late-season play.  Berry was named MVP of the 2016 ACC Tournament, where UNC defeated Virginia for the title.  Berry is also looking to expand his game to more than just point guard.

“I’ve been trying to learn the 2 (guard) more, and I’ve been going back and forth between the guard positions,” Berry said.  “But playing the point guard here is the hardest position by far.”

A trio of freshmen will look to make an impact for UNC’s veteran squad this season.

6-10 power forward Tony Bradley is the highest ranked recruit of the three newcomers.  The Bartow, Florida native was named a McDonald’s All American after averaging 22.8 points, 12.6 rebounds, and 3 blocks a game as a senior.

“Tony Bradley has been the most impressive so far, and it’s not a surprise,” Williams said.  “He’s been effective, and everybody’s been pulling for him.  He’s going to really help us inside, protecting the basket and scoring.”

Brandon Robinson, a 6-5 guard from Douglasville, Georgia, is the sharpshooter of the new group.  The 4-star recruit averaged 23 points, 5.3 rebounds, and 3.8 assists a game while earning All-State honors.

Seventh Woods athleticism in transition is what made him a household name during his high school career.  The two-time Mr. Basketball in South Carolina averaged nearly 19 points, 5 assists, and 3.6 steals per game while gaining All-State honors every year since eighth grade.

“We need him because of that explosiveness, pushing the basketball is what we need,” Williams said of Woods.  “There’s going to be times when he’s going to be in the lineup with the ball and Joel Berry may be down the court.”

This year’s schedule also looks to be another daunting task that will have the squad ready for the rigors of March Madness.

UNC heads to Maui in late November as the season gets up and running with the Maui Invitational.  A loaded bracket includes Connecticut, Oklahoma State, Georgetown, Oregon, and Wisconsin.

December 17th in Las Vegas Carolina will roll the dice in a matchup with Kentucky and John Calipari, a holiday showdown on a neutral court that could have implications months down the road.

The ACC regular season will also be a tough hill to climb.  UNC will face 5 Top 25 preseason ranked ACC teams, as well as annual visits to Cameron Indoor and the PNC Arena versus rivals Duke and N.C. State.

This UNC team will be an interesting mix of experienced veterans and talented newcomers, a team that can attain many of the same lofty goals they achieved last season.

If they can only forget those 4.7 seconds.