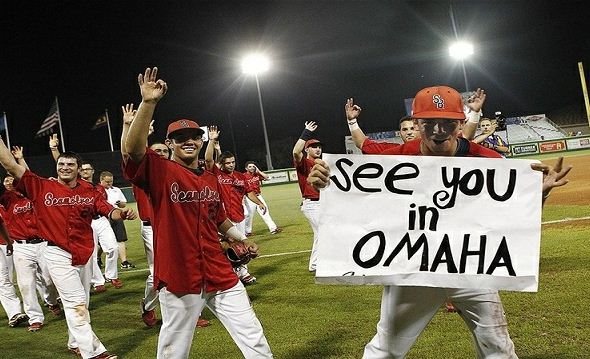 The 2012 College World Series field is set and eight teams look to fight their way through the brackets to claim the 2012 National Championship for college baseball.  Many of these teams are regular attendees of the CWS, but this season also features a couple of teams making their first appearance. The field contains some of the best talent in College Baseball throughout the 2012 season, as well as some of the teams playing their best ball right now.  Let’s take a look at the field, team by team, before we get into our 2012 CWS predictions.

Winners of the Mid-American Conference, Kent State bullied their way through the regionals, including a mind-numbing 21 inning victory over Kentucky.  They beat the home team Oregon Ducks in three games in the Eugene Super Regional, and are one of the surprise teams to find their way to Omaha this season.

This team rides on the shoulders of senior shortstop Jimmy Rider.  He leads active Division I players in at-bat and doubles, providing some much needed experience to these Golden Flashes. The pitching staff is solid, but not overwhelming.  A pair of 11 game winners (Senior David Starn and Sophomore Tyler Skulina) will see the bulk of the innings for Kent State as they make a push for a national championship. The lack of experience in the College World Series will likely be a huge factor for this team.  They do have some playoff experience, but never on a stage like this.  They will need to learn to control their emotions and stay focused on each play in order to pull off an upset against the heavily favored teams in this field.

Stony Brook had to go on the road and win big games in order to reach the 2012 College World Series, but in doing so, they beat out hosts Miami and LSU on their way to the school’s first ever CWS appearance.  Say what you will about this team, they come in hot as winners of 28 out of their last 31 games.

This team puts up impressive offensive numbers, led by their junior CF Travis Jankowski.  He is hitting a mind-blowing .422 and leads the Seawolves in on base percentage (.485).  The team as a whole is hitting .355 and they will need every single one of those hits during the College World Series.  They are serious underdogs heading into Omaha, but they have shown that they can beat seemingly superior teams.  They are in a similar situation as Kent State, rookies to the CWS in a field filled with veteran teams.  Perhaps their inexperience can be a benefit, as they have yet to understand the gravity of their appearance in Omaha and could take some teams by surprise.

The Arkansas Razorbacks had a mediocre 16-14 record in SEC play, but were able to secure a number 2 seed as they entered the Houston Regional.  A pair of thrilling 1-0 victories over Rice in the Houston Regional and Baylor in the Waco Super Regional secured Arkansas with their ticket to the 2012 College World Series.

Junior third baseman Matt Reynolds is the offensive superstar of this Razorbacks team. He’s hitting .338 with 7 homers, 43 RBIs and 15 stolen bases and needs to keep up his hot play for Arkansas to have a chance at winning a CWS title. Their pitching was also a key factor in their trip to Omaha, especially when the bats went cold in the Super Regional against Baylor.  The Razorbacks mustered only 7 runs in 3 games, but were bailed out by some stellar pitching.  Cold bats are usually not an indicator of success in Omaha which puts that much more pressure on this pitching staff.

The Bruins have been dominant throughout this post-season, outscoring their opponents 33-9 through their 5 games.  They also come into Omaha as one of the nation’s hottest teams as winners of 16 out of their last 17 games.

As evidenced by their 2012 post-season, this team thrives on their pitching, particularly Nick Vander Tuig (10-3). Holding post-season teams to less than a 2 runs per game average is an impressive feat, and the UCLA Bruins will need to be on point with their pitching if they want to make a legitimate run at the title.  Offensively, the Bruins are led by RF Jeff Gelalich, who comes in with a .365 average and 11 home runs.  Gelalich also leads the team in steals (15) and OBP (.485).  Aside from their right fielder, however, the Bruins do not threaten much offensively.  Without Gelalich, UCLA has hit only 12 home runs in 61 games and has only broken the 7-run threshold three times in their past 10 games.  To become the 2012 CWS champs, UCLA will need to perform well both pitching and hitting, although they have yet to give us an indication that they can do both.

This trip to Omaha will mark the 16th College World Series appearance for these Wildcats, but only their first since 2004.  They used a combination of great hitting and clutch pitching to sweep their way through St. Johns in the Tucson Super Regional.

Arizona strength lies in its pitching, particularly that of Konner Wade.  His complete game victory in the clinching game of the Super Regional is the type of performance the entire staff will need to replicate in order to give the Wildcats a legit shot at the title. Second perhaps only to their pitching is the speed of the Arizona Wildcats.  They led the entire Pac-12 with 81 stolen bases, and give pitchers fits when they get on base.  It will also be important for Arizona to jump out early against their opponents in the 2012 College World Series.  They have played from behind in most of their games this year, but have come back to win the majority of those games.  They can make things a lot easier on them and their pitchers if they can jump out to an early lead.

What looked like a team on the downswing, losing 7 out of 10 entering the post-season, the Florida State Seminoles have since won five in a row, sweeping their way to the 2012 College World Series. Their bats have come alive, particularly in blowout wins over Stanford in the Super Regional.

This potent offensive attack for the Seminoles is led by Jayce Boyd (.389) and James Ramsey (.382) This pair has combined to produce 116 RBI’s this season and powering this FSU offense.  In order to win the 2012 College World Series, however, Florida State must rely on the freshman arms of Brandon Leibrandt and Mike Compton.  They are a combined 19-4 this season but will be facing some very good and disciplined teams in Omaha. It will be exciting to watch how these pitchers grow and mature as the CWS progresses. FSU’s most valuable weapon, however, doesn’t swing a bat or wear a glove – he directs the players.  Mike Martin’s 15th CWS appearance in 33 years is impressive, despite the fact that he has yet to win a National Championship.  He will have his team prepared, as there is no substitute for experience in the manager’s spot.

The Gamecocks have a staggering 21 game winning streak in the post season, stretching back to previous seasons.  They swept their way through the Columbia Regional and then used a pair of impressive victories over Oklahoma to punch their ticket to the 2012 CWS.

The Gamecocks strongest pitcher and team leader is senior left-handed pitcher Michael Roth.  His postseason resume boasts an impressive 6-0 record. He is 7-1 this season with a 2.50 ERA in 115 innings. With their appearances and success the past few years, Omaha must seem like a sister city to Columbia, SC.  That 21 game postseason winning streak we referenced earlier includes 11 straight in Omaha.  They are a team in serious contention for the title, but their hopes could quickly be dashed in their opening game against the Florida Gators. Still, they are on our shortlist for potential 2012 College World Series champions.

Behind the strength of their offense, the top seeded Florida Gators punched their ticket to Omaha with a sweep of NC State.  They put up 24 runs in their two closeout games against Georgia Tech in the Regional and NC State in the Super Regional.

The player that everyone will have their eye on is Junior catcher Mike Zunino.  He was the first college player selected in the MLB draft earlier this month, and leads the Gators with offense 19 homers and 64 RBIs as well as a .322 batting average.

The Gators boast one of the nation’s top pitching staffs, led by Karsten Whitson.  He was a top 10 pick out of high school and has yet to lose a game as a starter.  He has also shown that he can come out of the bullpen when needed, setting the table for the closer multiple times this year.  If this team has any weakness at all, it might be their ability to hit left handed pitching.  Southpaws have kept them in check (relatively speaking) throughout the season and particularly in the Super Regional.  They will face a tough lefty in their opening matchup against South Carolina, but make no mistake, this team is good enough overall to overcome a less than stellar offensive output. They are the clear favorites to win the 2012 College World Series.

Florida appears to be the frontrunner this year, with a solid team, both offensively and defensively.  They have a great mixture of talent and experience that usually equates to national championships.  They will be tested early on by the South Carolina Gamecocks, but if they get past them, it should be smooth sailing for the Gators.