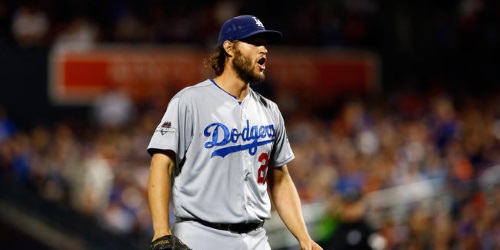 The Los Angeles Dodgers have soared to the best record in baseball over the first 90 games of the season, causing many fans to “Think Blue” about October.

The club’s 61-29 mark at the break has been propelled to no one’s surprise by a pitching staff that has lived up to the preseason accolades and predictions.  The Dodgers’ 3.15 staff ERA leads all of baseball, while the squad’s nine shutouts and 240 walks allowed pace the National League at the break.

Two dominant lefties at the top of the rotation have shouldered the burden.  Clayton Kershaw has been his usual outer-worldly self so far this year.  “The Claw” sports an NL-best 14 wins against only two losses, and also leads the league with 132.1 innings pitched with an ERA of 2.18.  Kershaw has incredibly only walked 14 hitters while striking out 159.

While Kershaw’s dominance is no shocker, the hurling of Alex Wood so far this year came out of nowhere.  Wood has jumped out to a 10-0 record with an ERA of 1.67 while improving his strikeout/walk ratio by over a single K from last year.  Wood has also averaged slightly more than six innings per start and was deservedly named to the All-Star team.

On the offensive side the Dodgers feature a slugging attack that ranks second in the National League, with 127 home runs and an OPS of .789 that stands only behind the Washington Nationals in the NL.

Youth is being served to Dodgers fans this year.  Last season’s Rookie of the Year Corey Seager has continued to impress after last year’s debut.  Seager is hitting .298 with 13 homers and 22 team-leading doubles.  Seager was also named to the All-Star team while playing Gold Glove caliber defense.

Cody Bellinger’s name has been in lights since his call-up to the majors in late April.  Bellinger has more than capably filled in for oft-injured Adrian Gonzalez this year.  The rookie’s power numbers have been impressive and unexpected.  Bellinger has slugged 25 home runs, good for third-best in the league, while driving in 58 and slugging .619.

The Dodgers’ postseason struggles the last few years have been well documented, but so far their 2017 regular season has been one for the record books.  Can regular season success translate into postseason glory?  Only time will tell.  Stay tuned.