Welcome to the first edition of the Haterade Cooler, a look back at the idiot athletes who made sports headlines this week. Like so many athletes before them, today’s athletes are crazy, irresponsible, and just downright hate-worthy. So before you start begging me to open up a window to let some of the hate out, let’s get started. Never before has an NFL prospect been so highly talented and produced so little (well maybe if you don’t count Ryan “Cryin” Leaf). The Oakland Raiders shelled out big money to get him and now they want some of it back. Congratulations J-Russ, you sucked so bad that the team actually asked for their money back on you! I hope you didn’t have anything grandiose lined up for the $10 mil that Oakland wants back from you. But I’m sure Al Davis will put it to good use – sustaining that “crypt keeper” like body can’t be cheap. So not only is Russell’s value plummeting as a brain dead owner finally saw that he wasn’t fit to lead the Raiders anywhere further than the end of the buffet line for seconds, but he won’t even get the money he thought was “guaranteed.” Good luck buddy, hope your college major is something marketable…

This guy has some stones. He had the audacity to walk into the New York Knick’s office and request an advance on his salary. We’d like to think it went a little something like this…

Eddy Curry: Hi is Donny in today? I need to ask him a couple questions about my pay checks.

Receptionist: Yes, he is in, might I tell him who’s here to see him?

Eddy Curry: You don’t recognize me? I’m a member of the New York Knicks

Receptionist: Ohh, Eddy, that’s right, I didn’t recognize you away from your usual spot on the bench. I’ll let Mr. Walsh Know that you’re here.

Donny Walsh: Eddy! What a pleasant surprise, I haven’t seen you since your high school days! Ha, just kidding, that’s a little office joke we have going around here. What can I do for you? Are you requesting a trade? Here to file a grievance?

Eddy Curry: Well, no sir. I’m actually here to see if I can get a slight advance on my paycheck for next week.

Donny Walsh: Sure Eddy, how much do you need to get you by? A couple thousand do the trick?

Eddy Curry: Well, I was thinking more along the lines of $8 million.

Donny Walsh: *into the intercom* Security – can you come in here please?

HOW DOES AN NBA PLAYER WRACK UP THAT MUCH DEBT??????? I couldn’t spend 10 million dollars a year if I tried. Especially if I knew that sooner or later, people at work would begin to take notice that I was NEVER THERE! Eddy – a word of advice: When you’re working at McDonalds in a few years, take a couple paychecks and at least stuff them in your mattress so you have something to fall back on during hard times.

This one is pretty recent as the news just came out today that UConn has been cited for no less than 8 different recruiting violations. Listen, I know that the rules change pretty regularly, the guidelines are strict and eyes and ears are everywhere in the college basketball recruiting world. But you have one job during the offseason as a college basketball coach – monitor your freaking assistants. Don’t let them run roughshod over the program that you have dedicated your life to building. 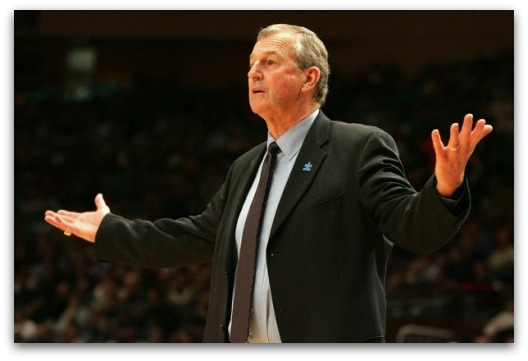 I don’t care if you handed out the free hotel passes or airline tickets to the recruit or if it was the towel boy, the fact of the matter is that you knew in some way shape or form that recruiting violations were happening and you did nothing to stop it. He obviously didn’t learn his lesson as similar sanctions were imposed on UConn back in 1996. Jim, you are one of the storied coaches in the NCAA, your name is right up there with Roy Williams, Jim Boeheim, and Coach K – you don’t need these little gimmicks to get people to come play basketball for UConn. Have a little confidence in your program.